Level 2 Water Restrictions are in place The Council is taking a proactive approach to protect our rivers and ensure we don’t reach critically low levels of water. Read more »
Keyword: #reflectingball

The Longest Place Name in the World

Information about the Longest Place Name in the World, located close to Porangahau.

The Longest Place Name in the World 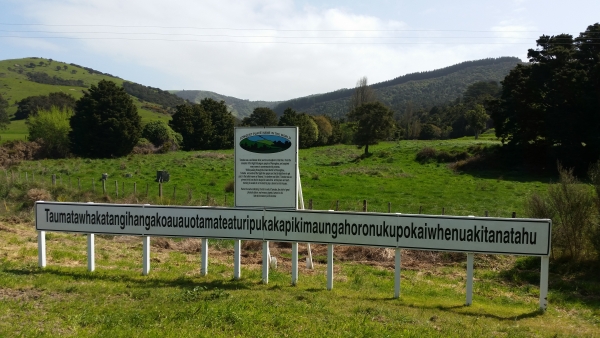 It is the name given by the local Maori people, Ngati Kere to a hill to celebrate the eponymous ancestor Tamatea Pokai Whenua.

Tamatea was a famous chief and warrior of his time. His son Kahungunu was the founder of the Ngati Kahungunu tribe which extends from Gisborne to Cape Palliser.

Tamatea acquired his long name through different happenings in his life. Turipukaka-pikimaunga-tahu was given through his many raids and wanderings and he was such a huge muscular man that his name suited him.

It appears that while travelling through the back of Porangahau, Tamatea encountered the Ngati-Hine tribe and had to fight them to get past. The battle is known as the Matanui battle and during that fight his brother was killed.

Tamatea was so grieved over the loss of his brother that he stayed for quite a long time at that place and each morning he would sit on the knoll and play his lament on what is called Koauau or Maori flute.

Hence the name Taumata-whaka-tangihanga-koauau-o-Tamatea-turi-pukaka-pikimaunga-horonuku-pokai-whenua-kitana-tahu, which means ‘The hilltop where Tamatea with big knees, conqueror of mountains, eater of land, traveller over land and sea, played his koauau to his beloved.’

This lament is still sung at many tangi.

From the top of the hill, one can see the peak of the Te Awa Putahi, the spiritual ancestral mountain claimed by Ngati kere and, looking inland to the west, the long flat peak of Raekatia, the spiritual mountain there is a pinnacle called — Tetaumatawhakatangihangakoauauorangitane to celebrate Rangitane, the eponymous ancestor of the Tamaki Nui a Rua district.

How to get there:

The original site is situated 6kms from Porangahau on privately owned land.  Turn right onto Wimbledon Rd before you head into Porangahau village.  The track starts at 510 Wimbledon Rd, route 52.

The Longest Sign (10 metres) for the Longest Place Name can be viewed 5 kms along this road.