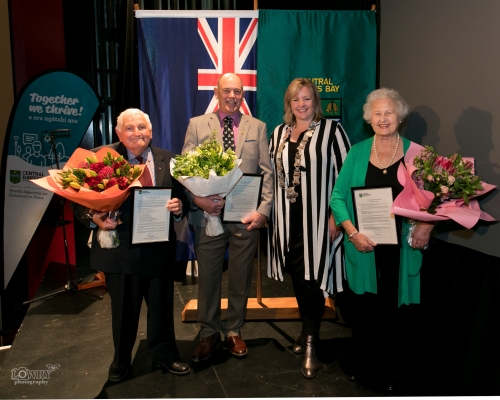 The award honours those outstanding citizens in the Central Hawke’s Bay community who over a long period of time have gone above and beyond to serve their community.

“This ultimate award recognises not only service to Central Hawke’s Bay, but depth of service, and longevity of service,” said Mayor Alex Walker, who hosted the evening’s event.

“These three award winners are people who really make the wheels go round in the fabric of our society, and the wheels would not go around without them as they do.

“They truly are exceptional people.”

The annual ceremony presented a new format in 2020, introducing two new award categories including the Community Service Award and Organisation of the Year Award.

“It’s an extremely difficult job for the Civic Awards Selection Panel to select and choose just a few incredible people to honour in Central Hawke’s Bay each year, because there are so many of you out there doing fantastic and selfless work for us all,” said Mayor Walker in her introductory address to attendees.

“For that reason, last year the decision was made to increase the categories of the awards to allow us to recognise a broader range of people.”

The recipient of the 2020 Organisation of the Year Award, recognised for making a transformational impact on Central Hawke’s Bay, is:
•    The Pakeke Centre

Nominations for all awards were submitted to Central Hawke’s Bay District Council between 23 July 2020 and 27 August 2020.

The 2020 awards ceremony also acknowledged all nominees of Mayor Walker’s ‘Unsung Heroes’ initiative held throughout the COVID-19 and drought events, to provide the opportunity for public recognition of their efforts. Many of the ‘Unsung Heroes’ were in attendance at the ceremony.

Mayor Walker said, “This year’s ceremony is one that’ll be in the record books. We survived the lock down thanks to the strength of our community and this is what makes Central Hawke’s Bay the special place that it is. It is an honour to recognise our Unsung Heroes tonight and I personally thank them for all that they contributed during what was such a difficult time for many in our community. Thank you.”

The Civic Honours Award Ceremony 2020 was held at the Central Hawke’s Bay Municipal Theatre in Waipawa on 29 September 2020.